It’s now October and the mist rises from the Skeena River here in Terrace BC.

My client today flew in from Japan and after a long flight and jet lag the early morning pickup from the Kitimat Lodge was a strain on the mental spirit of any fly angler. Fortunately we are here chasing fresh Coho Salmon and the elusive Steelhead.

We park at the pool we call the Gods Run, a nice beat of flowing riffle water that looks like a highway for the fish that are running up the lower Skeena into the small tributaries where they were born.

Koatsu takes his time setting up his rod, I mean a long time. I wonder what’s he up to. I see he has a split cane bamboo rod, old old style, Bob Clay old.

His fellow anglers, are already fishing the pool, excited to cast a spey line as long as they can into the clear water. He tapes his rod with a stretchy clear tape, I ask him what kind of tape, he tells me hockey players tape. I have a quick look at the roll and it’s the tape the players use to secure their shin pads to the outer socks.

This rod has no Ferrell, it is cut at a 10-20 degree angle and taped about 6-10 inches for a secure connection.

He walks into the top of the run and sets up. He makes one cast with his homemade squidro style fly, mostly white in color. I’ve only seen a awesome tyer, Ariel Kuppers from Kitimat tie a similar style.

The cast is a nice one as the split cane rod wiggles as the line loads.

"Fish on Tracey," he says; sure enough he is into a over-sized Coho Salmon, the rod bends aggressively, I’m waiting for the crack of the rod to break, it holds up amazingly. The Coho is almost within reach and off it came.

Unfortunately the monofilament tippet broke at the loop to loop connection of his sinking tip. We shrug it off and come out of the water and get warm by my accommodating fire, he lights up a cigarette, and smiles, we need no other words, the bite seems good this early AM.

I pull out my 20lb test monofilament and tell him I’m gonna make a Bimini Twist for him.

This is a saltwater leader, a shock leader in fact, that has amazing strength as it stretches giving the line 1.5 times the strength, little did we know that it was the key to what was about to happen soon after.

Koatsu makes his way strategically down the river in anticipation of the take from a fish.

Well all of a sudden he gets that grab of a lifetime. The fish does not show, uncommon as most Steelhead do once hooked. It did however give us the inclination that it was a sizable fish as it ran up river about 100m and held in its position. I’ve never seen a fisherman fight a fish upstream for such a period.

Finally the fish turned and actually came close enough for us to have a look at the Skeena beast. It was confirmed that it was a sizable Steelhead, it’s red cheeks and slight pink lateral line was all we needed to see.

Then the battle was on, the Steelhead decided to take a run downstream 300 meters and was not gonna stop till it hit Prince Rupert, it was in total control.

Koatsu was using a Saracione light drag reel and had to palm the scrap by his own desires.

I told him we have to walk down the river as his running line was gone off the reel and into the backing. I told him to turn the fish towards shore with his rod as it was in the middle of the Skeena River.

Well the fish did not like that and peeled another 200m of line, the reels line capacity was almost at the end and was facing a possibility of getting spooled.

We walked to the lower pool which was deep and slow hoping the Steelhead would give up at this point. I’m tired he says, I look at him and say this is a trophy fish and fight the mother F??ker as hard as you can as your line is way too far downstream.

He gets the second wind from my encouragement, at this time the other 2 anglers have been asked to get out of the water as this Steelhead is a runaway freight train without a brake.

He gains some line but not enough, the fish again finds the fast water and heads downriver.

Having fished the area for a number of years I know the next pool is deep and slow so we must walk down to this point to get the last and only chance to land this trophy.

He listens well and is a attentive student, his arms and wrists are burning and I’m not sure if the rod or Koatsu will make this happen or not.

Then something changes, I’ve seen this before, the line in the water looks like it’s snagged on something, I ask him is the line on a stick? He say no, I’m beyond excited and nervous and tell him pull hard, and the rod flexes to maximum bend, he says maybe a stick. I grab his line and walk into the water and sure enough the line is hung up on a stick, I lift the line and it immediately goes downriver, pull again I tell him and the Steelhead responds with the scream of his reel, ok we still have him.

We enter our last chance to land this fish in the slow deep pool, the Steelhead is resting and gaining strength. Pull pull I say, make him come to us, he does exactly that and the fish turns towards shore.

Koatsu is gaining all the line back onto his reel and Hank our fishing partner says I can see your shooting head which means the fish is about 15 meters from us, the beast finally comes from the deep and is within netting range, I ponder if my net will fit this 30lber or not.

I’m shaking now and wait my chance, the fish makes a death roll and this is usually when they get off, I’m now feeling ill and want to throw up, as this is a fish I’ve chased for 25 years to see.

Koatsu was on shore, his rod bent in half, and the Steelhead graced us with his presence, at this time I told him pull as hard as you can to bring the fish to me, the silence was riveting, it was then I took my stab with the net, it was uneventful, it barely fit the net, I screamed in enjoyment throughout the Skeena valley. The fellas chimed in. 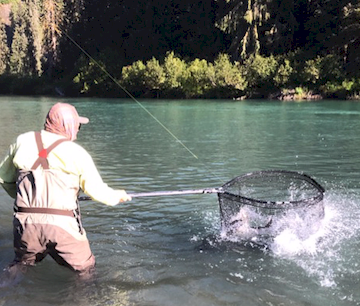